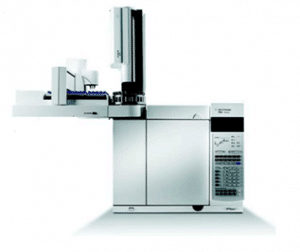 A weighed volume of the sample (approx. 2g) will be submerged into a known volume of chloroform (10ml) for 1 hour with stirring. Extracted sample components will then be freed from remaining starting material by filtration (.5um filter) followed by concentration using an antivaporator. The solid will then be dissolved in a known volume of chloroform (1ml). The resulting liquid will then be injected into the GC-MS using an auto-injector and then transferred in the gas phase into a gas chromatography column.

\Components are then separated as a function of temperature and interaction with the column stationary phase. They are then subjected to an electron impact (EI) mass spectrometry source. The resulting characteristic fragmentation patterns are then used for component identification. Comparison of the sample spectra to reference spectra for thousands of known compounds often allows for positive component identification.

Comparison with a calibration curve for known amounts of the reference material can then be used for quantitation. A three point calibration is standard. This technique only provides information on volatile sample components.