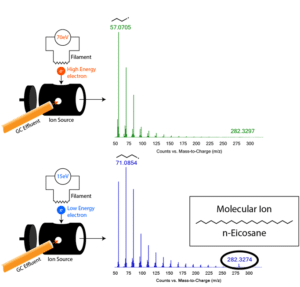 Traditionally, mass spectrometry performed with gas chromatography is done using ion sources which produce high energy electrons.  The electrons produced by the ion source are directed at the incoming analytes and are used to produce ions which are guided through the mass spectrometer and detected based on their mass-to-charge ratio (m/z).  Through the ionization process, the ions produced are typically fragments of the parent ion.  The fragment ion m/z values and their abundance ratios are compared to extensive mass spectral libraries for identification of the analytes.   This is a robust process generally producing good matches for compounds present in the mass spectral libraries.  However, in many cases compounds detected are not present in the library.  Even with high resolution QTOF mass spectrometers, unknowns cannot always be identified if only fragments are detected.  In these cases, Low energy EI can be used to produce more intensity for the larger mass ions.  For many analytes, this will include the molecular ion from which the molecular formula can be calculated with high resolution QTOF data. This allows for identification of these previously unidentifiable components.